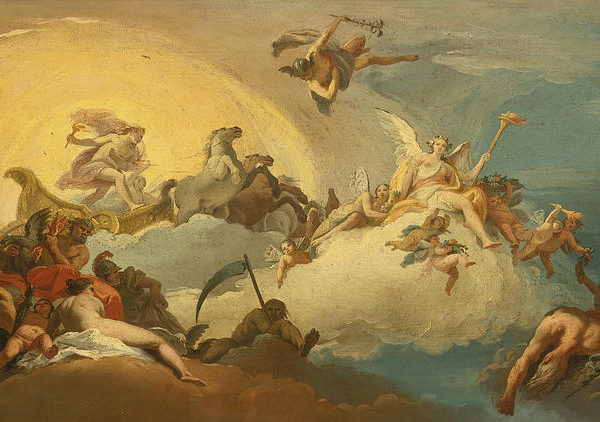 
Each sign of the Zodiac has its Gods, Goddesses, unique traits, planets, and ruling elements that directly influence their characteristics, peculiarities, and ways of acting. See below, which is the ruling god of each zodiac sign!

Mars, the god of war, rules the sign of Aries. He brings to this sign the intolerant and often aggressive temperament that can lead the Arian to put himself in various unpleasant situations. The god Mars is Greek, son of Juno and Jupiter. According to Mythology, it comes from the impulsiveness of this sign. Moreover, the aggression of this god is imminent: he rules all violent wars involving large bloodbaths.

Taureans are possessive, jealous, value beauty, are seductive, and love with intensity. These are undoubtedly characteristics of the goddess Venus. This Greek goddess is responsible for love, finances, and luxury. Venus, also called Aphrodite, is highly passionate, and it is from this, love comes coupled with the intensity of passion and lust. So it is a goddess of extreme power since many (both men and gods) do crazy things when they are in love or subjected to the desire of the flesh.

The sign of Gemini is known for its intense curiosity and constant change, and feel the need to always be with friends, with whom they can talk and exchange experiences. These characteristics come from Mercury, the god of communication. Geminis are controlled by this god, also known as Hermes, among the gods of Olympus. Considered one of the smartest gods, Mercury is the son of Zeus.

Cancerians are known for their fatherhood and brotherhood and are incredibly loving beings to the people they love. Such traits do justice to the goddess of agriculture and marriage protector Demeter, who rules this sign. For this reason, Cancer people are very protective and feel very eager to form a solid family structure. Daughter of the god of time, Kronos, Demeter, is also a protector of the fecundation of women and any seed that exists on planet Earth.

Beauty, elegance, attention, self-centeredness, luxury, and strength. All these characteristics are present in the god Apollo, the sun god, who rules Leo. This god always seeks to draw more attention than others and is very concerned with outward beauty and elegance. Considered the most beautiful god among Olympus, Apollo was the son of Zeus and the goddess of dusk, Leto. Apollo is also related to all kinds of art, but mainly to music and poetry.

Mercury, the god of communication that rules Gemini, also rules Virgo. Here, perhaps, other characteristics of this god are more evident, such as intelligence, maturity, seriousness, and communication itself. Mercury has also given Virgins the characteristic of being more neurotic and organized with everything they do.

Like Taurus, Libra people are also ruled by Venus. But just as Mercury gives different characteristics to Virgo and Gemini, the goddess Aphrodite also gives some aspects to Libra such as understanding and the most intellectual form of love and beauty - that’s why this sign begins to fall in love through conversations that are very intellectual and knowledge-based. Venus also rules Libra in her social capacity, excellent taste, and seeking balance in all areas of life.

Scorpio is the sign ruled by Hades, the god of hell and all that’s deep down below. Also known as Pluto, this god is the brother of Zeus and the son of Kronos. This god reigned the world of death and sadness, thus justifying the bad name carried by this sign. He had the power to restore a man’s life. However, he rarely used this gift.

Going by the ancient system of knowledge, the ruling planet of Scorpio is Mars, and based upon the modern system of astrology, the ruling body for Scorpio is Pluto. While some people consider manifestations of Scorpio are symbolically associated with bull and lion. According to popular myth, the two manifestations of Scorpio represent opposite characteristics of each other. While the bull represents uncontrolled rage and the intensity of one’s anger, the lion represents courage and softness, and gentleness in one’s emotions. However, it is not uncommon for Scorpio lovers to get into conflicts, especially when they disagree about which sign is in control and which one is the loser. Although the Scorpio girl may have a healthy dislike or hatred for her brother, the hatred and enmity have to simmer before their relationship with boyfriends or husbands can progress.

Because of their fiery, aggressive nature, Scorpios often lead to dangerous and volatile lifestyles. Therefore, if you are a dedicated and devoted Scorpio, you must remember that your actions must always put yourself, your family, and your friends at the top of your priorities. The Scorpio is indeed an ancient and powerful symbol, but that does not mean you can be anything but loyal to your patron and yourself. If you disregard this law and forget who you are supposed to please, you will find yourself on the wrong side of the law and face many troubles.

If you are a true believer, then you can call upon the powers of goddess Freya to help you deal with problems, whether personal or professional. The ancient symbol of Freya has always represented the eternal feminine and the purest forms of love. The Greeks and Romans associated the colors gold and silver with the Mother Goddess and associated Freya with the attainment of wisdom and the gods’ rule. If you are determined to follow your patron’s guidance, then you will always know when to turn to the forces of goddess Freya.

Zeus, the best-known god of Olympus, rules the sign of Sagittarius. Zeus is the king and father of all gods and men on Earth. This god had power under all atmospheric phenomena - whatever they were. But though he could cast lightning, hurricanes, and storms wherever he pleased, he always kept watching over order and harmony. He was married to Hera and was the father of Mars - the god of war, Hebe - the goddess of youth, Hephaestus - the god of fire, and Eileithiya - the goddess of marriage and childbirth.

The ruling god of Capricorn is Saturn, also called Kronos. A very disciplined and disciplining being, patient, mature, and not very emotional - characteristics sometimes found in Capricorns. If you know someone of this sign, you will notice that they are passionate about watches because of their ruling god Kronos, who is the god of time. Saturn is relatively stable and controls your anxiety perfectly, even when dealing with issues of remarkable ambition and outstanding achievements.

The sign of Aquarius is governed by Uranus, the libertarian, liberating, and libertine god. According to Greek mythology, during the creation of everything, Uranus controlled the heavens. It is also revealed in mythology that Gaia gave birth to Uranus, yet later, he became her lover. The present feature of Uranus in Aquarians, among others, is the constant need to fulfill desires. In addition to the freedom that is paramount for the people of this sign.

Pisces is ruled by Neptune, the god of the seas and oceans. By ruling the waters of the world, Neptune causes Pisceans to be intensely attached to their emotions. This god is also given the character of a collective mindset that many people of this sign have. Neptune lets life go the way of the high seas, inconsistent and without guidance, so it is thought to know which way to go. The god Neptune is also known as Poseidon.

If you are a Pisces, there are several things you can do to honor your zodiac patron. Pisces people are perfectionists who value tradition above all else. If you value and follow the ideals of the Sun God, you will indeed find yourself surrounded by historical figures, plaques, and other symbols. So, if you consider yourself a water-respecting, ocean-loving person. You may want to call upon the Dolphin symbol when you want to give someone a gift related to the Ocean.

You must therefore seek enlightenment and learn to appreciate the natural world for what it is. While many people call upon the gods’ powers to help them in their quest for knowledge, it is up to the wise amongst us to seek the right path for themselves and those they love. If you want to be a closer follower of the Sun God, you may decide to become his patron. It is a great honor considering that the symbol of the Sun God is knowledge, truth, justice, and wisdom.