The Whole House Systems in The Astrology and Zodiac Signs

They produce houses of unequal size.


In Astrology, there are twelve houses. These houses represent a means to bind every moment in time to earthly affairs. They come into being due to the Earth’s rotation and division of the ecliptic plane into twelve sections. In a day, an Ascendant (first house cusp) moves through all the signs in the zodiacal circle. Dawn (the rise of the Sun in the East) and dusk (the Sun setting in the West) define an Ascendant and a Descendant in each natal chart. For example, a person born at dawn will have the Sun near their Ascendant, and a person born at sundown will have the Sun near their Descendant. Generally, if you were born in the day, the Sun would be above the horizon and, if you were born at night, the Sun would be below the horizon. Houses are numbered counterclockwise from the cusp of the first house and are invariably projected on the ecliptic plane.

In Western Astrology, the Placidus House system has emerged as the most significant one among all the other house systems. Nonetheless, let’s have a look at the other existing House Systems, which mostly fall under two broad categories: 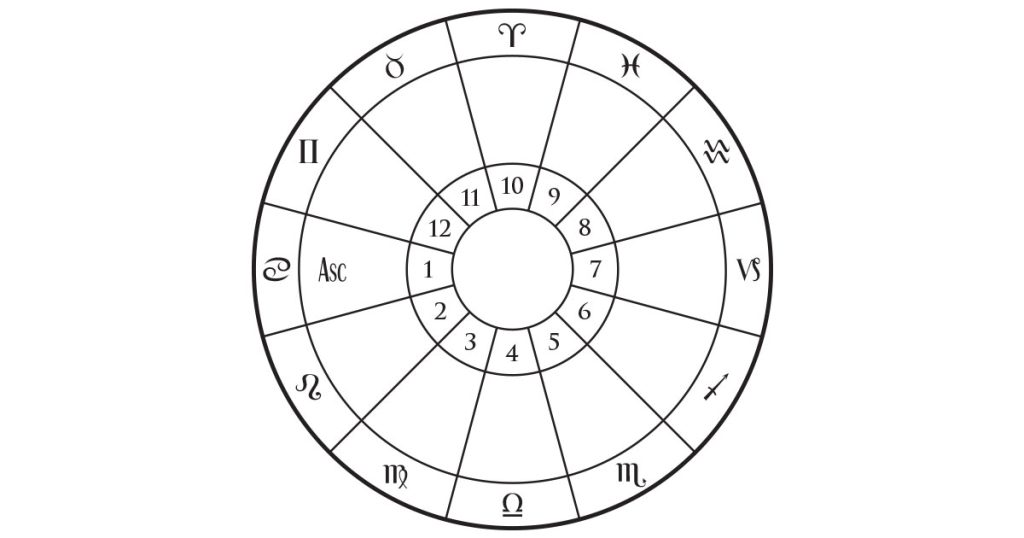 It is an ancient house division system and one of the most simplified systems in Vedic Astrology. Furthermore, it was also the primary system in Hellenistic traditions of Astrology. Here, the Ascendant only determines the rising sign, and the first house begins at zero degrees of this sign. The circle formation is complete once the consecutive signs correspond to the next house.

It divides the ecliptic plane into twelve sections of 30 degrees each, but the Ascendant or the eastern point of sunrise determines the first house cusp. Currently, this system is mainly used in higher latitudes of sixty degrees and above, where the Placidean system is not very reliable. In both scenarios, instead of representing a tenth house cusp, Midheaven or the highest point in the chart (MC) keeps moving around any house that is above the horizon.

They produce houses of unequal size.

In these systems, the houses are divided by four points: Ascendant, Descendant, Nadir (Imum Coeli), and Midheaven (Medium Coeli). Astrologers call them the angles of every horoscope because they represent strongly accented houses. Here, each planet derives a prominent influence on an individual’s life. Below are some of the house systems that fit into this category.

This simple system divides each quadrant of the ecliptic plane into three equal parts. This house system serves as the base for all other quadrant house systems even though their precise points are calculated differently. The Regiomontanus house system is obtained from the projection of the celestial equator into twelve divisions on the ecliptic plane. Although it is not in use now, it was a significant predecessor of the Placidus house system, the most commonly used system in modern Western Astrology.

The Placidus house system is dependent on every degree of the ecliptic movement. It begins from nadir to the horizon and from the latter to the Midheaven. Performance in higher altitudes is the major obstacle that this system has to face because certain degrees are never in contact with the horizon. Consequently, without the extension of the system, the planets that fall under them cannot be allocated into houses. For example, if one makes a chart for a distant city in the north, the chart will be “swallowed” by the distortion created, leaving it impossible to use houses at all, when all one has are two large houses and those standing next to them.

The Meridian system, also known as the Zariel system or the Axial Rotation system, is a non-admissible house system that divides the celestial equator into twelve parts of 30 degrees. It also projects them to the ecliptic and the great circles that consist of the North and South celestial poles. This house system is one that this list could not have missed. It was introduced in the 20th century, but it never received a massive following. Although its use in modern times is limited, it can prove advantageous in relocation astrology.

Now that you know all about the houses, let’s dive further into house modality. House modality represents the characteristics associated with each house, much like zodiac signs.

They are the starting points of quadrants and at the horoscope’s angles. They are connected to the nature of the planet Mars representing vigor and enthusiasm. Cardinal signs rule these houses: Aries, Cancer, Libra, and Capricorn and hence have cardinal qualities of action, the way one deals with a particular situation.

These are the houses that come after the angular ones. They represent stability and dislike change, and movement similar to the qualities fixed signs exhibit: Taurus, Leo, Scorpio, and Aquarius.

To determine the nature of these houses is a little tricky because they are predecessors to the batch in the next angular house. Some astrologers define these houses as thoughts one may have before taking action. They represent inconsistency but also the process of growing and learning. They are ruled by mutable signs: Gemini, Virgo, Sagittarius, and Pisces.