Understanding the significance of aspects and their place in our approach is essential for any astrological interpretation. We can only sense an environment or identify certain attributes of a person without them. Still, we won’t comprehend the relationships they have in their lives, their parent-child relationships, or the emotional ties that distinguish them. We can see that these aspects of your natal chart are similar to bonds between two DNA strands if you think of it as a graphic representation of your DNA. Without them, no story would be connected, and you wouldn’t get the picture of relating that appears to be so crucial for our survival on this planet.

An aspect is one of the primary angles formed by projections of various celestial bodies, house cusps, or imaginary points in a zodiac circle. Their chief function is to add dynamism to our map by reflecting relationships between multiple entities and depicting the passage of time through orbs and planetary speed. Each feature is a viewpoint, a point of view, and how one celestial body looks at the other. If an aspect is simple and constructive, energy will flow. We will see the people involved exchange benevolent glances, gazing at each other with affection, respect, or support and acceptance. Tensions arising from challenging aspects can only be alleviated by raising consciousness and recognizing that more energy is required to repair what is damaged or heal wounds left by our ancestors. 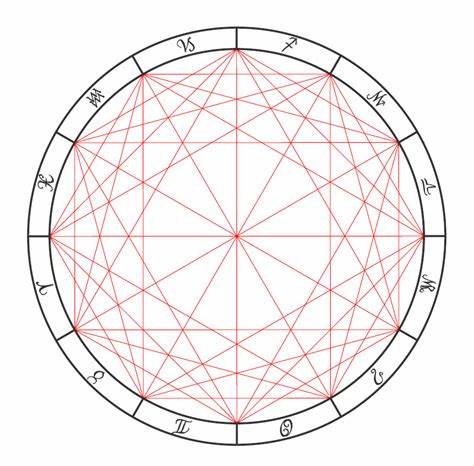 Numerous angular relations are recognized as minor aspects of modern astrology. Still, we must distinguish between those with a long history and a fundamental position in any perception from those with less visible manifestations. These key five relationships in one’s map are seen as angles of 0, 60, 90, 120, and 180 degrees and are known as “Ptolemaic Aspects.” According to some astrologers, the 30° and 150° relationships are almost as significant as the others since they appear to represent two missing points in the circle’s 30-by-30 division. The following are the critical aspects seen by conventional Astrology and described by Ptolemy:

If the Sun is involved, conjunction is described as an aspect of 0 degrees with a permitted orb of up to 17 degrees. It talks about one’s Self, and depending on the existence of the entities involved, it may have both positive and negative connotations. We will see the conjunction as challenging for this planet if there is a malefic pressing on another world, particularly if its integrity is low. On the other hand, when a beneficent planet is part of conjunction, it is seen as a supportive aspect, especially for a malefic in conjunction with the supporting world.

Opposing individuals have a 180-degree component, which places them on the two farthest points in the zodiac circle. Each opposition refers to “The Others,” as well as the stress and difficulty of acknowledging disagreements with others. It manifests in Uranus’ essence as a desire to isolate, divide, and categorize the universe and everything in it into “good and evil” while seeing everything in black and white. The opposition’s biggest challenge is accepting that seemingly disparate items have a common point and that each sign of the zodiac appears to mimic the one across from it.

A sextile is a 30-degree angle between celestial bodies. It has a supportive aspect with Venus’s nature, which makes it simple to ground, manifest, and enjoy, and it typically supports us with affection, appreciation, and acceptance. This is an aspect of earthly joys that speak of emotional and physical interaction because it provides insight into a person’s relationship with their body and physiology. This should not be overlooked in the case of a problematic disposition in which planets that were once in a sextile are carried away by their rulers to form a square or an opposition, as this could indicate self-destructive impulses that aren’t immediately apparent.

A trine is a 120-degree relationship between two persons in a zodiac circle. It is a supportive feature due to Jupiter’s existence, making it difficult to ground, but it provides security, wisdom, peace, and perspective. Things that last in our lives are still seen through the eyes and desires of a trine, and we can see this environment in the charts of people with long-lasting friendships and relationships. If there are beneficent or maleficent planets involved in this aspect, they will protect us and guide us in the right direction.

A square is shaped by celestial bodies in one’s chart forming a 90-degree angle. The essence of Mars presents a problematic aspect, adding stress and rage into our lives. It is the element of “outer influences” that can cause us to lose our boundaries and make us vulnerable to change put on us by others and circumstances outside our control. Although oppositions provide clarification in direct conflict and repairable relationships, squaring aspects seem to bend our energy and concentration, allowing too many unrecognizable and non-supporting objects into our universe.

This is a common trait of meddling characters who play significant roles in situations and relationships that aren’t theirs to judge or interfere with.

Minor aspects have a lesser influence, are typically only understood in modern Astrology, and are manifested primarily by personality characteristics and supporting circumstances that aren’t as evident as those manifested by major aspects. These angular relations, which are officially known as Semi-Sextile and Quincunx (Inconjunct), consider 30 and 150-degree features, respectively, and would have the most significant influence on all minor aspects.

An orb is a distance from an exact aspect, which is a link between entities with less than one degree of angular relation to each of the angular relations mentioned above. We can see that disputes and help can be felt even though orbs are far larger than we will need to identify them as important, even if there are limitations to orbs and distances from exact contacts that can still be felt and taken into account.

Planets in the same sign, for example, with one on the first degree and the other on the last, would still have plenty to talk about. Although their orbs are 29 degrees apart and their conjunction isn’t even visible by allowed orbs or by a potential Semi-Sextile, they will share the same ruler and be guided by the same celestial body.

The application or differentiating nature of the aspect is the best way to see the significance of the planetary movement. It will not feel the same if a quick entity, such as the Moon, encounters an aspect at the time of creation, or if it has already formed the aspect and is now only carrying the consequences forward. Applying aspects are those that are about to be made. Separating characteristics are those that disappear with time.

To grasp this, consider the chart as a pulsing being, formed at a particular time when certain issues were important and then quickly forgotten. Approaching conjunction would have a significant effect on a person’s life, bringing the energy of the relentless collision and dragging us in its path over and over again to repeat a pattern that we were born with. On the other hand, after an aspect occurs, the passing environment will cause it to fade through life, and most separations will be barely felt as we grow older unless their disposition pulls us into the same cycle of repetition.

If a planet is not similar to any feature of a person’s map, its influence in their life can lead to loneliness, alienation, and a lack of help and understanding from the outside world. In this scenario, we can look at the planet’s ruler and the facets it creates, as they will always be hidden under the surface and have much more “off-the-grid” significance than the planet’s primary role. We can only assume that it is this planet’s destiny to explore itself by isolation and channeling all that a given sign has to offer on its own when it is placed in the sign of its own rule (for example, if Venus makes no aspects in Taurus).

We claim the Moon is void, of course, as it passes the last aspect on its way through a sign. If we see it in this state in someone’s natal map, it means their Soul is looking for solitude and inner acceptance, similar to how a balsamic Moon ends one cycle only to begin the next. This is a place that is as much about depression as it is about the experience, and the need for emotional validation is high and frequent. The key here is to look at the Moon’s ruler and see if it leads the Moon to a new beginning or if this entire lifespan is an ode to cleansing and discovering the inner reality.