Eight of Swords Meaning in love and relationships

Eight of Swords Meaning in Situation and Question

Eight of Swords Meaning of the card of the day

Eight of Swords Combination with other cards 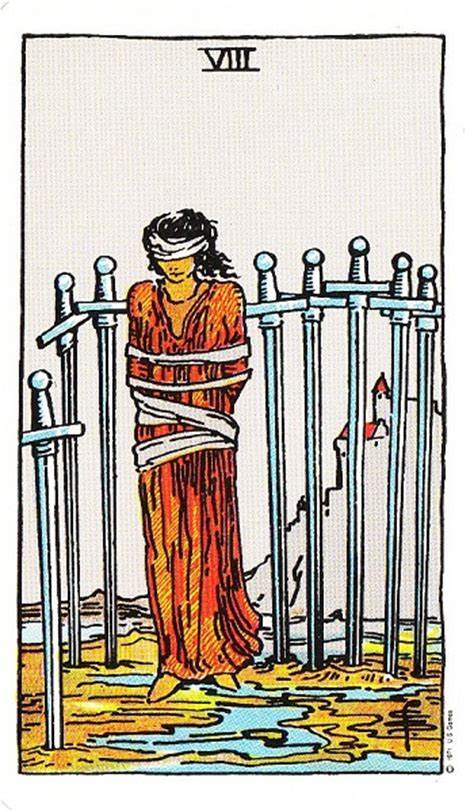 Arkan characterizes a person with his inconstancy, some doubts. The Eight of Swords means both external and internal factors that indicate a problem. These can be objective misunderstandings and those that come from the person himself.

The card can talk about some kind of predicament, helplessness, capriciousness, restrictions, a thorny path to your goal, being driven into a dead end. It turns out that the map has a lot of meanings. It should also be taken as a warning that unforeseen circumstances are coming that cannot be avoided.

A person under the influence of this Arcana is not free and dependent on circumstances. He deprived himself of his freedom, and is ready to obey someone’s rules and requirements, paying for his mistakes, admitting and atoning for his guilt. He is quite a wise person, so he can treat his problems philosophically.

There is a saying: “A fly in the ointment in a barrel of honey.” So the inverted card of the Eight of Swords is a spoonful of honey in a large barrel of tar. It turns out that a person sees a little positive in a huge mass of negativity. This may be due to past betrayal, difficulties, hard work, depression, and unforeseen situations. But there are, of course, bright sides that give a person hope.

In a period of complete helplessness and hopelessness, he can count on the completion of such restrictions. And even though positive changes will not solve all the problems, you can at least count on the fact that some of them are already in the past. And thanks to this, a person begins to believe in himself, his success.

Problems that seemed so global are actually not so terrible. At the same time, freedom of action appears, fear is no more, and all restrictions are nearing completion.

Eight of Swords: Meaning in love and relationships

There is a problem in the relationship between two people. Here, the destructive influence on the feelings of a person and the obvious inconsistency of characters also matter. Moreover, in a relationship, both partners do not want to give in to each other. Marriage can end badly, as the relationship has already become obsolete.

Perhaps a person voluntarily moves away from his partner when he is simply unable to maintain a relationship, and behaves infantile. In other words, there is a crisis in the relationship. They literally hang by a thread. And this situation cannot be resolved, since one of the partners does not want to save the union.

Is it possible to keep two people together if they do not experience sincere feelings for each other, joy and love. In such a family, quarrels, misunderstandings, and mutual attacks are increasingly occurring.

The lasso testifies to reconciliation when a person strives for this and tries to find a common language with a loved one. And, indeed, the situation cannot be called a dead end, everything can be resolved if you want it.

Also, the card can describe the fact that one of the partners is clearly pulling the blanket over himself, and is ready to make a decision for both. There is negativity in relationships, as depression, unnecessary emotions, and anxiety are manifested.

A person with an inverted eight of swords can behave differently: he is biased towards a loved one, he is too honest with himself, and this prevents him from building relationships with a partner (after all, you want not only to love yourself, but to be loved too).

Eight of Swords: Meaning in Situation and Question

A person has certain life difficulties, duties have not yet been clearly defined. It will not be easy for him to be given official duties, experience and competence will not be enough. Perhaps he himself will be very critical of himself due to inexperience, and thereby further aggravate the problem.

A situation with litigation, financial losses, bad news related to the money issue is possible. The situation will be a dead end, as if their hands were tied, and nothing more can be done.

The card speaks of the troubles that have taken place. This may be related to professional activities, and to other situations too.

These problems greatly spoil the overall picture of a person, but are not fatal. A person has begun a boring period in life, which is distinguished by its monotony. But this is just the same very difficult period. Of course, he will get out of this story, but it will happen very slowly - step by step.

If you wisely dispose of material resources, connect your foresight and foresight, then success will surely come.

Eight of Swords: Meaning of the card of the day

Today, fate will push a person against a ban. He will feel squeezed and constrained, and completely different restrictions may occur.

You need to pull yourself together, take a step, and try to learn how to overcome this stage. If it seems that this shackled state has not gone anywhere, then another way will have to be found. Just don’t turn your fears into an endless series of problems. You just need to gather your courage.

Perhaps on this day a person will behave notorious, he tends to be modest and shy. But if he fights with all his might, overcoming his fears, then it will be much easier for him to live in this world among people.

It is not recommended to take on several cases at the same time. You need to show your patience a little and plan the sequence of your actions. Even if the situation is critical, you should not lose your face, panic and fuss.

The card can talk about financial losses, bad news and other failures, but this is not a reason to panic. The slowness and inconsistency of a person, the inconsistency of his actions and the influence of the people around him can be guilty of such a combination of circumstances.

It may happen that a person, by virtue of his financial means, cannot afford what he dreams of. But he has the opportunity to save up for an expensive purchase, do not lose hope.

Eight of Swords: Combination with other cards