Page of Wands Meaning in Love and Relationships

Page of Wands Meaning in Situation and Question

Page of Wands Meaning of the Card of the Day

Page of Wands Combination with other cards 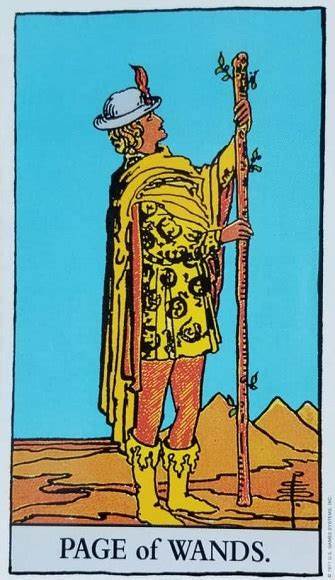 Most often, the Page of Wands is interpreted as a certain person (young, fair-haired and light-eyed), which will soon appear in the life of a fortuneteller. It can be both a girl and a boy. According to the sign of the Zodiac, this will be a representative of the fire element: Aries, Leo or Sagittarius.

The card can also mean receiving an interesting and profitable offer, such that it is simply a sin to refuse. It also means a certain mood, a state of mind: enthusiasm, enthusiasm, energy (everything that is characteristic of healthy youth).

The inverted Page of Wands speaks of an excessive interest in risk, dubious enterprises. It can characterize a person who is inclined to draw for no reason, ambitious, boastful, self-confident, but inept and inexperienced.

Also, this card in an inverted position speaks of important news that came late, the inability to start acting immediately, to assess the significance and far-reaching results of one’s actions.

Arkan can talk about stubbornness, the desire to insist on one’s own contrary to common sense. This card also has a mocking meaning - it may indicate that the fortuneteller will find himself in a comic situation. Among other things, the lasso can talk about a tendency to unjustified risk, adventurism.

Page of Wands: Meaning in Love and Relationships

In the sphere of feelings, the Page of Wands means a good start. It cannot be interpreted as an unequivocal success, this card is understood as a romantic attachment, effective flirting, a preliminary explanation. It is infatuation, but not love.

Sometimes the Page of Wands can say that the relationship has good prospects, that they are built on a genuine feeling and are devoid of understatement. This card also suggests that in this situation you can not be afraid of cunning, self-interest on the part of a partner, his attempts to use a person “blindly”.

Often the Page of Wands speaks of some kind of love adventure - the appearance of a new acquaintance or a joint adventurous event. This event will serve as a good impetus to renew relations, give them a new “charge”.

In this position, the card suggests that feelings, although stormy, are not real. The Page of Wands in an inverted position indicates quarrels, disagreements and even a break. It is better not to trust the power of emotions when such a card appears. The card speaks of mutual irritation that appears when partners communicate. Sometimes the card warns of the presence of an opponent (or rival), deceit and tricks on the part of a partner.

The card speaks of the instability of relations that quickly arose, but can disappear just as quickly. It is not necessary to count on happiness together until old age in this situation. Another inverted Page of Wands indicates infidelity and lack of tact.

Page of Wands: Meaning in Situation and Question

In a situation, the card indicates the presence of an opportunity for its resolution, but not the resolution itself. So, if the question was asked about business, the Page of Wands speaks of a favorable situation for career growth, the presence of promising ideas. But this does not mean that the situation will be realized - it all depends on the person himself. Another such card is evidence of receiving a very tempting offer, which will simply be criminally ignored.

Arkan reports that a person has to do difficult but interesting work that will bring him recognition and pleasure. A new business will allow the fortuneteller to fully show his talents.

Sometimes this card indicates that success is very likely, but it is better to get an authoritative patron. It can also be a signal that you should act strictly according to the law to achieve success, taking into account even the smallest nuances.

The Page of Wands can talk about an upcoming pleasant and useful acquaintance (a new acquaintance will be a fair-haired young man) or about the appearance of a new friend.

In this position, the card speaks of poor prospects for undertakings, the inability to approach the matter correctly, and the lack of necessary skills. It may indicate a lack of ability to plan their actions, to predict their results. An inverted lasso in this position indicates that a person is greedy for flattery and uses it instead of correct, accurate information.

In general, the card should be understood as the news that the business started will end unsuccessfully, it is not worth waiting for a good resolution of the situation.

Page of Wands: Meaning of the Card of the Day

As a card of the day, the Page of Wands portends a bright, unusual event. But you need to be careful and not miss a sign of an upcoming pleasant surprise. It can be a promotion, a pleasant meeting, or a “romance of the century.” But this does not mean at all that the event will be fateful. Perhaps it will turn out to be just a very interesting and pleasant episode, which will turn into a plot for stories for grandchildren.

Wanting a lot (even everything, all at once and right here) is not harmful. But it is better to imagine the sensible scale and reality of your desires, so as not to get involved in a dubious adventurous project, which as a result will only bring a bunch of problems. But those who are confident in their plans need to make efforts to implement them, and everything will work out, and the result will please.

Page of Wands: Combination with other cards