Queen of Cups Meaning in Love and Relationships

Queen of Cups Meaning in Situation and Question

Queen of Cups Card Meaning of the Day

Queen of Cups Card Board

Queen of Cups Combination with other cards 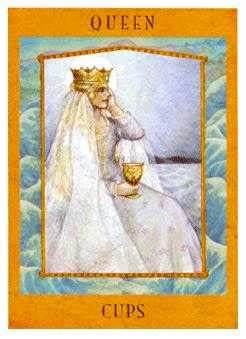 The Queen of Cups symbolizes success in conceived affairs with the help of brilliant intuition. In the life of a person to whom this card has fallen, there is generally a feeling of constant premonition, like a gift of clairvoyance.

In addition, the fortuneteller prefers to rely on the imagination, and not the arguments of the mind, it often seems that such a person is not of this world. He is constantly in his thoughts and dreams.

The card indicates the need for a loved one or an improvement in relations with a partner with whom a spiritual connection has been lost. A fortuneteller may have a tendency to self-sacrifice, introspection. It will take someone from the environment who can give wise advice, provide all possible assistance.

When a person really wants something, he takes what he wants for reality. The fallen Queen of Cups warns against this terrible mistake. Given the inclination of a person to be in the world of dreams, such a phenomenon would be very dangerous.

A fortuneteller may change his mood, because an inverted card shows the image of a wayward and cruel person. Perhaps the appearance of a tendency to exaggerate everything or, conversely, to underestimate.

Around the person who makes the alignment, intrigues are woven behind his back, gossip does not stop. Or the person herself is a lover of slander. At the household level, bad news can suddenly appear, which will bring loneliness and tears with it. There is a possibility that in the environment to which the fortuneteller belongs, there will be a scandal that spoils his reputation.

Queen of Cups: Meaning in Love and Relationships

If a relationship is dealt with, then the dropped card indicates that in the union a person does not strive for profit, does not act by calculation. Everything happens at the behest of the soul and heart.

The card can symbolize tremendous sexual energy, but at the same time, longing for love, affection and tenderness. The Queen of Cups tells the person making the alignment that the power of love will help achieve something very important in life, for which it is worth living. This will require not only receiving love, but also giving it in return.

The card warns the fortuneteller: the partner in the relationship is trying to manipulate. Either the manipulator is the person who makes the deal. The card also indicates a feeling of loneliness, despite the fact that there is a relationship, and they are quite stable.

The Queen of Cups in an inverted position is often an angry and vengeful person who acts recklessly without thinking about what she is doing. However, she has an excuse: she has been betrayed, she has been lied to, she has been neglected.

Often the card falls out when the fortuneteller cannot completely liberate himself in a relationship, tell his partner what he feels, what he thinks about.

Queen of Cups: Meaning in Situation and Question

If a bad event happened recently, you should definitely analyze the situation and answer yourself the question, why did this happen? Is it connected with personal qualities, with external circumstances? In any case, intuition will play an important role in the upcoming situations.

The subconscious will soon begin to actively give signals in the form of signs, dreams. Do not neglect them, they will benefit, help you make the right decision.

Help to solve a difficult life problem can be provided by someone close to you. Most likely, it will be the best friend or female representative: mother, grandmother, stepmother, older sister.

In the life of a person who makes a layout, problems are not created from scratch, as he believes, but because of excessive emotionality. To solve the current situation, you need to have more information. The one who is obliged to be responsible for information content is hiding something so that the ultimate goal is not achieved.

Do not listen to the advice of people who have just rubbed their trust. There is a possibility that they do it out of spite or for selfish purposes. If the alignment was made on a love situation - the outcome is deplorable: betrayal, parting, a complete lack of trust and mutual understanding. You will have to make great efforts to preserve and restore the old feelings for your partner.

It often happens that the Queen of Cups pops up in a scenario when there is dependence on a partner, self-sacrifice for the sake of constantly satisfying the needs of a spouse. Such behavior will not lead to anything good, you will soon get bored with your partner. Relationships cannot be saved.

Queen of Cups: Card Meaning of the Day

On this day, the fortuneteller will especially sensitively feel the emotional mood of the people around him. There is a possibility that because of someone else’s behavior, he may suffer. Be careful, fate sends signs everywhere.

Stay true to yourself, your principles, your feelings. However, do not take what you passionately desire to possess at face value, this does not happen in reality.

It is possible to meet a woman with whom a trusting relationship will immediately appear. She will become a wise adviser, a kind and interesting conversationalist.

Queen of Cups: Card Board

Excessive emotionality in different situations can be your minus or plus. Sensitivity is useful in relationships with loved ones, when you want to spend more time with them, give them care and warmth.

However, such a trait can be actively discussed behind the back. A well-developed intuition will tell you what to do in a given situation. It will help to determine with the least probability of error which person is in front of you, what he is going to do, whether he has bad intentions, insidious plans.

Queen of Cups: Combination with other cards