Five of Wands Meaning in love and relationships

Five of Wands Meaning in Situation and Question

Five of Wands Meaning of the Card of the Day

Five of Wands Combination with other cards 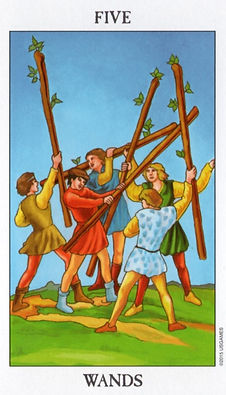 The main meaning of this card is the struggle with other people, possible competitors who use the same methods as yourself, but have the opposite opinion. To a greater extent, this is an open clash with equal rivals, rather than deceit.

The lasso can denote changes that will not go the easy way, and for them you will have to make efforts, overcoming yourself and life’s difficulties. There is rivalry here, but it is not destructive, but useful, which allows you to test your strength and strengthen confidence in them in case of success.

The battlefield can be, like you have known for a long time, or completely new. Often this is competition at work or participation in another competition. This is a kind of challenge, an opportunity to realize oneself by overcoming difficulties.

The value of the card has a favorable outcome, the challenge is thrown, but you should also have enough strength, therefore, you should not expect a complete defeat in case of failure, and the opportunity to succeed is quite high.

In an inverted meaning, the card means struggle in the worst manifestations, deceit, intrigue, the desire to benefit from the conflicts of strangers. Sometimes a card can even mean excessive cruelty and possible problems with the law.

Conflict and struggle do not carry a positive start and cause only nervousness, unnecessary fuss and underground intrigues. Also, a possible failure due to deceit, or it means that the argument was not worth it, in the end you will only lose strength and time.

Incorrect assessment of one’s own capabilities as a result of failure. The inability to reach any kind of understanding.

Five of Wands: Meaning in love and relationships

The lasso testifies to disputes between lovers. The constant struggle and desire to pull the blanket over you can lead to a compromise or a clear understanding of who is in the lead. Although there is a conflict, it is transparent, and the partners are honest with each other.

It may also indicate that some problems cannot be solved without a dispute, or that there is passion in the couple, and it does not get bored.

Constant conflicts and swearing can speak of the hatred of one person for another. This may simply be talking about the difficult nature of the partner, because of which quarrels arise. In general, this card is about empty conflicts, when there is no mutual understanding between partners, and the near future is not expected.

In the event of a divorce or separation, it speaks of the unsuccessfulness of this case, there will be many obstacles and minor quarrels that will take time and effort.

Five of Wands: Meaning in Situation and Question

Situations are often associated with conflicts, intersection of interests, difficulties in solving problems.

Possible conflicts with colleagues at work, which lead to the necessary changes. Fundamental disagreements may arise, and no one will want to meet, as well as noisy demonstrative conflicts.

Nevertheless, such a stubborn struggle pushes for productive actions and the achievement of new heights. The struggle is transferred to health as a result, the temperature rises or minor inflammations occur.

Another meaning of the Five of Wands is the struggle for who will be the leader. The relationship between spouses is based on rivalry, because of this, conflicts arise. The constant struggle is the result, which can be the transition of relations to a new level, or their complete collapse.

Conflict with the outside world, defending one’s rights and point of view. Do not be afraid of conflict as something negative. It’s the same as challenging life and proving that you can. It is important to correctly assess your strengths in order to succeed.

Through this kind of aggressive behavior, you can develop and reach new heights, the main thing is to soberly assess the situation.

The Five of Wands reversed can signify a hidden and veiled rivalry. Rudeness, destructive conflicts and scandals, the likelihood of physical impact, the ability to wrap them in favor.

Disunity, lack of coordination and agreement in collective actions. Difficulties with the work due to misunderstandings after the work has been started. Empty and unproductive activity. A long recovery of the body when it fights with itself. The impossibility of agreeing and reaching a consensus.

The conflict is not on the surface, but hidden, which only gets worse with time. Closure, dissatisfaction, fear of an open conflict from the possible use of physical force. Enmity and hatred disguised as kindness.

It is important to abstract as much as possible from the conflict if it is necessary to show cruelty or rudeness in this. If the conflict can go too far, it is better to retreat in time before it is too late. In order not to be involved in a fight or other proceedings that do not carry any meaning, and are the result of hidden hatred, you need to move as far as possible from the center of clarification.

Five of Wands: Meaning of the Card of the Day

Today you have a test, so you need to be as prepared as possible for it. Do not worry about this, because this is a kind of exam, according to the results of which, you can confirm to yourself your ability to solve problems, which will positively affect your self-esteem.

This can affect different areas, for example, psychological confrontation with a loved one or competition at work, and here and there you can’t give up, you need to show that you are still in great shape.

In any case, regardless of the result, whether it is a win or a loss, you will get a positive experience. If you openly meet this test and do everything in your power, victory will definitely be yours, it doesn’t matter if you lose, in this case you will draw something you need.

You will not be able to avoid stress, emotions and worries. You need to make an effort so that it does not harm you, but on the contrary, it benefits you.

It is important to correctly calculate your strength and not rush headlong to solving the problem, having soberly assessed everything, you can get to work.

You should not give up after the first difficulties that have arisen, and the main thing is to use the chance when it presents itself, and if you feel that you have the strength to act. Thanks to this, you can achieve significant results.

Five of Wands: Combination with other cards