King of Cups Meaning in Love and Relationships

King of Cups Meaning in Situation and Question

King of Cups Card Meaning of the Day

King of Cups Card Board

King of Cups Combination with other cards 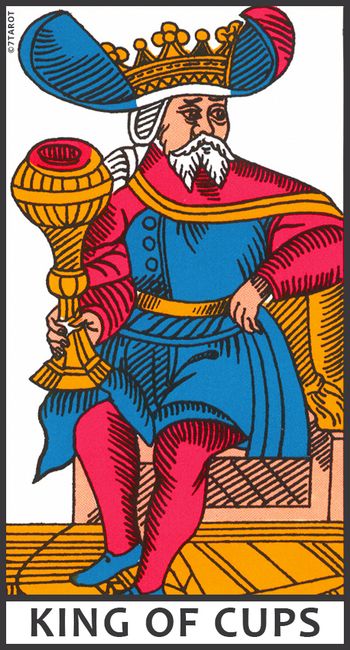 The King of Cups falls out as a sign of affection for one’s native places and one’s own cozy home. Crisis moments begin to end, obstacles pass you by, and ahead is only a wide bright streak and favorable resolutions of all difficulties. Relationships in marriage will become very strong, a strong emotional connection and trust will be established between the spouses.

The card symbolizes a successful responsible man, fair and mature. He is very reasonable and honest with everyone, making wise decisions. Thanks to his education and upbringing, he knows how to impress the lady of the heart.

The lasso does not represent a specific person who will definitely meet on the path of life. This is the very embodiment of power, honor, justice, reasonable and deliberate actions. Someone from the environment can help solve your problems completely disinterestedly, you just need to ask for help.

The King of Cups falls, as a rule, before the loss of something valuable in life. Also, the card testifies to dishonorable and insidious people who will meet on the fortuneteller’s life path.

Some person, in whose hands there is a huge power and influence, can spoil the plans, knock the intended goals off course. You don’t need to get close to such a person at all: neither try to make friends with him, nor start to conflict. Just step aside so as not to catch his eye.

Arkan warns the fortuneteller that there may be an insincere person who will act dishonestly towards him. Which side to expect betrayal and deceit will be prompted by the signs standing nearby.

Such a deceitful deceiver can become a serious obstacle in a career, a rival in a love relationship. Your reputation may also be at stake, perhaps you will be unfairly and undeservedly discredited, which will cause a huge scandal. In the end, the fortuneteller will not always be able to prove his integrity.

King of Cups: Meaning in Love and Relationships

In a love relationship, such a card falls out when a period of idyll and romance begins in the union. The partner becomes more attentive, accommodating, caring and gentle. Between spouses, deep feelings can flare up with renewed vigor.

In general, Arkan symbolizes emotional openness among partners, the realization of sexuality. A card falls out during that period of a romantic relationship, when it is necessary to support a lover, give him self-confidence, relieve fears and doubts, accept him as he is.

If a layout is made for a new acquaintance, and at the same time an inverted card falls out, this is a symbol that the new acquaintance is not at all who he claims to be. The first impression is always deceiving. And if the acquaintance goes too smoothly, quickly and perfectly, does it look like the truth? Perhaps they are trying to cheat you, take advantage of you for personal purposes.

Sometimes they can resort to the sexual side of relationships in order to win over and knock out material wealth. Often the King of Cups is a warning that a fortuneteller has met a person with bad habits (an alcoholic, a drug addict) or a criminal (a thief, a swindler).

King of Cups: Meaning in Situation and Question

It is possible that soon a fortuneteller will meet a very sensitive and attentive interlocutor who will listen to the problem and give wise advice, will provide all possible assistance. Or maybe someone from a close circle will tell you how to solve the problem.

Most likely, it will be a father or another mature person who knows a lot from the height of his worldly experience.

If the fortuneteller turned or is just going to turn to a professional for help, the King of Cups indicates and warns that this will be a waste of time and money. Not a professional, but a real scammer.

There is a possibility that a person has appeared nearby who uses you to achieve his own goals. Take a closer look, if there is a very charming man nearby who is persistently and rapidly trying to establish contact with you, this is a deceiver.

And if it’s not clear where a tempting offer came from in every sense, refuse, you won’t get any benefit from this, but there will be plenty of trouble.

King of Cups: Card Meaning of the Day

The card falls out when you need to restrain your feelings a little, making decisions, first of all, coordinating them with the mind, and not the heart. However, do not skimp on emotions with a loved one or with someone who craves your care and attention.

Share what worries you, what hurts your soul. In response, you will receive only pleasant words of support, wise and effective advice. On this day, a fortuneteller may meet a handsome man who will play an important role in the near future.

King of Cups: Card Board

The card falls out to give the following advice: everything that you wanted to achieve is already close, there is a small step left. There will be no difficulties and barriers on the way, luck itself holds fists for you. Even if there are some doubts, fears, you can safely throw them out of your head.

Everything will go absolutely smoothly, without unnecessary nerves and precedents. Go only forward without turning around - this is exactly the gait of the winner.

For greater confidence, ask for help from an influential person whom you know personally or one of your relatives and friends knows. He will not refuse to help, and extra hands will never interfere, especially when they belong to a very executive and responsible owner.

King of Cups: Combination with other cards