King of Swords Meaning in Love and Relationships

King of Swords Meaning in Situation and Question

King of Swords Card Meaning of the Day

King of Swords Card Board

King of Swords Combination with other cards 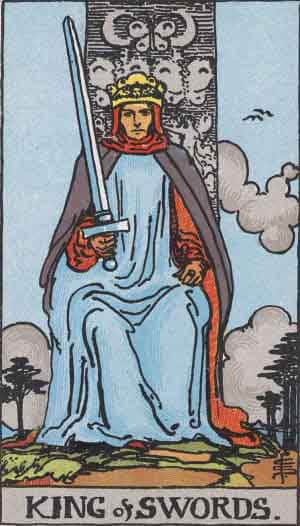 The King of Swords speaks of a high level of intelligence, objectivity, versatility, a flexible rational approach to life. A person under the influence of this Arcana has many interests, he is a shrewd and intelligent person.

As a rule, the card falls out to an authoritative person, to whom many people turn for advice. And a person, indeed, is able to give wise advice, a recommendation, a hint, as he has a remarkable mind of an adviser and vast life experience.

The map has a good value and a well-chosen strategy. A person is purposeful, able to overcome many obstacles. He will be distinguished by his leadership qualities, and money will literally stick to his hands. He is a leader who has managed to gain authority for himself. And the sword that he has in his hand is not just some kind of symbol, it is a weapon. The person who fell out, Arkan is aware of his power and leadership.

Under the influence of an inverted card of the King of Swords, a person becomes a cunning, cold cynic. He is able to step over anything for the sake of his own principles, which seem to him correct and useful.

The lasso is associated with intrigue, deceit and intimidation. In addition, the reversed King of Swords is often associated with injustice (someone has been hurt or abused). A person becomes conflicted and cruel, he opposes the whole world.

In addition, Arkan indicates to a person that the time has not yet come for active action, there is no specific task. In an inverted position, a person becomes very cautious and fearful. He thinks wrong, his calculations are wrong, and his emotions are filled with hysteria and anger. A person behaves insidiously, dishonestly, unscrupulously, maliciously and cruelly.

King of Swords: Meaning in Love and Relationships

A person does not want to take responsibility, he neglects his partner, experiments with his feelings, and prioritizes only his own interests.

True, Arkan not only carries a negative meaning, but in some ways even positive. For example, a person’s relationship may become clearer, when until recently there was no clarity. A person will be able to put an end to the relationship, but not in a mild form, which will make the other person hurt, injuring his heart.

It is important to understand something else, it is better to suffer what happened now than to suffer later from a failed relationship. Each of them will be grateful to fate for the fact that this happened, because all unnecessary hardships, hopeless ties would have collapsed anyway.

As a rule, the card speaks of a cynical, heartless and cunning person who is used to pointing out the partner’s shortcomings, criticizing him and manipulating him. It is not surprising if the outcome of such a relationship will come to a sad alignment, because the crisis in the relationship, no doubt, exists.

King of Swords: Meaning in Situation and Question

A person will have many positive moments and activities. He will have incredible talent in his own business, will be able to bring to life promising and successful ideas, and his other abilities. And we are talking, first of all, about a person who is able to achieve great results in life and the business to which he will devote himself.

Even on this map you can find out the type of human activity. He can be engaged in military affairs, politics, finance, jurisprudence. And we are talking about those people for whom it is important to have a “cold head and a warm heart.” This means that a person must have purposefulness, common sense and logic, must be able to draw conclusions, and find some benefit from his own failures.

In a situation, Arkan means - the help of an influential person, good job prospects, successful negotiations, successful mastering of new experience. The person will have the ability to persuade.

The card indicates that a person will strive to achieve his goal by various means. And perhaps even will neglect the law, if he repents that it is beneficial.

Under the influence of this Arcana, great material losses can be incurred. It is no coincidence that the weather on the map is unfriendly, as, in principle, the King of Swords himself. It is unlikely that there will be at least one person who wants to communicate with him of good will. Only this communication cannot be avoided.

King of Swords: Card Meaning of the Day

Fate presents a fortuneteller with an exam, where he needs to show his knowledge, ingenuity and ability to use his own experience. The fortuneteller must prepare well for this test, and for this he must have convincing projects and arguments, and it would not be out of place to use his charm and wit.

A person will definitely show his clear mind to others, especially in a situation that requires decisiveness and action. But if suddenly on this day some problem appears that does not seem to be solved alone, then you can use the help of a knowledgeable specialist.

King of Swords: Card Board

A fortuneteller has excellent trump cards that you simply cannot help but use, because under the influence of this card a person has wit and logical thinking. And he is incredibly charming and impartial. If you take this into account, then many difficulties and confusing situations will be solvable. A person understands everything, he quickly goes to his goal, and achieves it.

But it is important not to forget that you need to approach any situation adequately, evaluate your strengths correctly so as not to encounter irreparable mistakes.

King of Swords: Combination with other cards