Knight of Swords Meaning in Love and Relationships

Knight of Swords Meaning in Situation and Question

Knight of Swords Card Meaning of the Day

Knight of Swords Card Board

Knight of Swords Combination with other cards 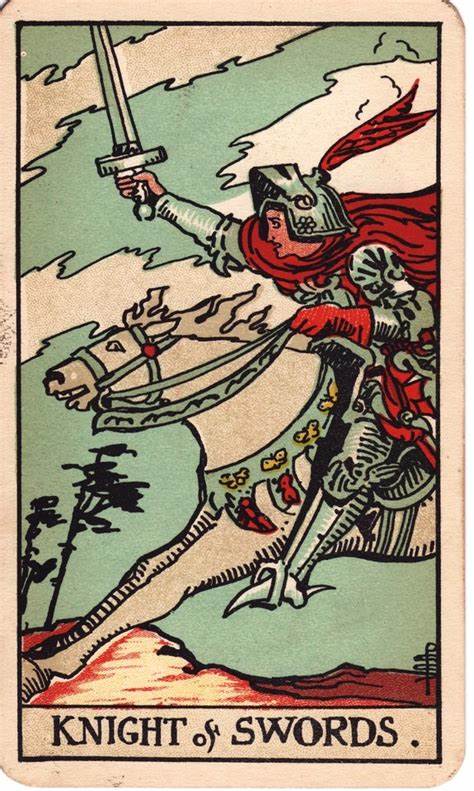 The Knight of Swords speaks of a person’s oratory, his intellectual abilities, independent and cunning character. A person with this Arcana can be called a technocrat and a cynic who is capable of being insidious, somewhat frivolous. This card cannot be called simple, it has a lot of aspects.

The lasso is associated with great potential, which is interpreted as rebellion, disagreement, opposition to something. A person does not try to prove himself, to make an image for himself. And perhaps this is manifested due to his selfish nature, despite the fact that he himself is trying to use his energy for peaceful purposes. He is endowed with excellent mental abilities, loves to analyze the situation and defend his point of view, assertive and quick-tempered.

Under the influence of this Arcana, stressful situations and vicissitudes of fate develop very rapidly. A person can simply catch fire with his ideas so much that it is impossible to convince him otherwise.

Under the influence of the inverted card of the Knight of Swords, a person becomes aggressive, loses the remnants of prudence. If there is some kind of quarrel between people, then it can develop into a fight. And if a person does not like someone, then he is able not only to spread unpleasant gossip about him, but also to bring him to depression.

It is impossible to achieve the desired result with an inverted Knight of Swords, especially in a state of pressure and aggression. There will be a great crisis in a person’s life, he will be incapable and insolvent. He will be characterized by such concepts as recklessness and imprudence, he will commit stupid, and sometimes stupid acts, make erroneous moves. The person does not fully understand whose side he is on, he shows his weakness and indecision. He competes excessively with his enemies and is envious of those people who have followers.

Knight of Swords: Meaning in Love and Relationships

There is a cooling of love, and if people are married, then there may be a desire to break off relations. The lasso provides for marriage on the basis of a marriage contract or fictitious.

The card says that a person needs personal living space. He strives for independence in marriage and love relationships. One of the partners can show their malice and neglect their loved one, show their sharp tongue.

As a rule, such marriages do not last long. If mutual relations lose their warmth and cordiality, then, as a rule, they end.

The card speaks of a strange relationship in which selfishness is present, people are not at all embarrassed by their negative emotions. Perhaps a crisis situation will happen when the need arises to discuss the problem and think about what can be changed in the relationship.

With the Knight of Swords reversed, this is an extravagant couple that no one understands, they are completely different from other couples. In the marriage of such people, ridiculous situations are even possible when one of the partners can suddenly disappear or leave somewhere without any explanation or warning.

Knight of Swords: Meaning in Situation and Question

Arkan interprets ill-conceived decisions, instant conclusions, inconstancy, lack of a clear concept of the situation. If a person has troubles, then he creates them for himself, this is obvious. This may be due to the shortcomings of his character or lack of experience.

Despite this, he is quite a quick-witted person who is able to grasp information on the fly, to show his intellect and sharp mind. That is, the card can have two meanings: it can show itself on the positive side, but at the same time it can open its negative side.

Financial difficulties may arise. But if a person manages to hide the negative qualities of his character, then he will bring himself closer to his goal, thanks to the mind and the ability to make the right decisions.

The card speaks of stupid things that a person will do. Under the influence of this Arcana, he will practically survive his work colleague, try to annoy him, and possibly the leadership too. No, he will not seek any benefit in this, he will simply want to cause trouble to other people.

Despite his great zeal for work, he manifests himself as a careless person and incompetent. Because of his own character, luck and luck turn away from him. But all his failures will be deservedly justified, he will receive his punishment for his own stupidities and mistakes.

Knight of Swords: Card Meaning of the Day

The map of the day indicates a conflict, which is why it is necessary to think clearly and soberly react to what is happening, and even to some extent in cold blood. Discuss, preferably without emotion. Thanks to this, even in a difficult situation, you can hope to win. But if it turns out to be a “draw”, it will also benefit, not harm.

On this day, a person will be indomitable, decisive, inquisitive. He is drawn to adventures and interesting situations where he will show his individuality in full. The person can be quick-tempered, impulsive, ready to sacrifice his own plans for short-lived moments of joy. He easily spoils the life of himself and the people around him, and is always in a hurry somewhere.

Knight of Swords: Card Board

A person does not always have the opportunity to properly distribute his strength and time, which causes discomfort. A person may find himself in an unpleasant conflict with other people. It will seem to him that everyone is educating and teaching him, giving useless advice. Although it would be worth, and in truth, to listen to others, their arguments and judgments, claims against you can be very fair.

You should put your thoughts in order, you do not need to make hasty actions and final decisions. And even when the decision has already been made, it is important not to be distracted and bring all your affairs to the end.

Knight of Swords: Combination with other cards