Nine of Wands Meaning in love and relationships

Nine of Wands Meaning in Situation and Question

Nine of Wands Meaning of the Card of the Day

Nine of Wands Combination with other cards 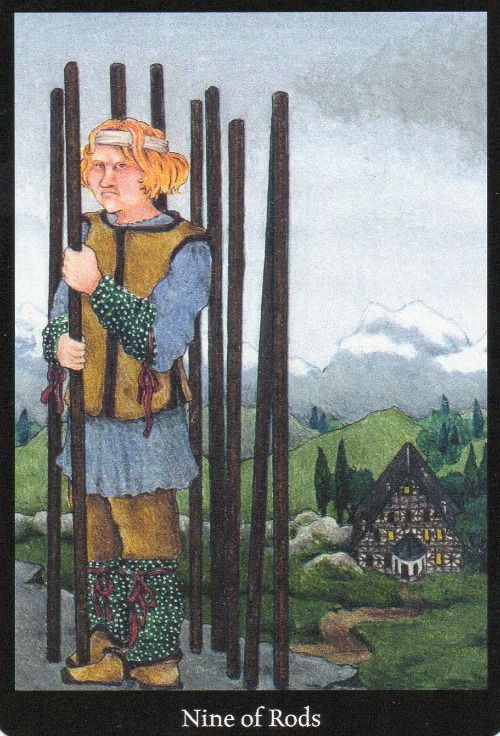 The main interpretations of the card: a sense of danger, success in a difficult struggle, readiness to defend one’s interests, possible fears and fears of an unknown future, a sense of impending success.

The fortuneteller has recently experienced difficult times. He had to achieve his goals with hard hard work. Problems and difficulties arose abound, but he withstood them steadfastly. Life’s difficulties hardened him so much that now he is not afraid of anything. He loves mental and physical activity, is not afraid of hard work. This person is very curious, and travel plays an important role in his life.

The card indicates such character traits of the fortuneteller: suspicion, stubbornness, unfriendly attitude, lack of initiative, selfishness. This person very often misinterprets the statements of others, which causes quarrels and conflict situations. He can’t communicate, so he’s lonely.

Usually, the card falls to those people who are in the minority. They are disliked in society because of secrecy. An inferiority complex prevents them from achieving their goals.

Nine of Wands: Meaning in love and relationships

If the card is upright, it predicts stability in relationships, harmony, warm contact. Disagreements are excluded. Loving people understand each other on a subconscious level. Everything goes on as usual. The fortuneteller is waiting for a joyful period. He will discover even more good qualities in his partner. In this regard, he will appreciate it even more.

The second interpretation: reassurance after betrayal and negative actions of a partner. A person who is being divined will find the strength to be distracted and forget about this stage of life. Old love wounds hurt badly. Great hopes were placed on this union.

His heart will soon open to new feelings. This relationship will change his views on the opposite sex. In other words, it is the return of love. Fate will give the fortuneteller great love.

If in this position the nine of wands fell out, it signals the complex nature of a person. It is very difficult for those around him. At this stage, the card warns: next to the fortuneteller is a partner whose reputation is rather dubious. He is prone to delinquency, abusing alcoholic beverages. Perhaps he hides more than one secret, prone to betrayal.

In any case, it is necessary to break off relations with a partner, otherwise negative consequences are inevitable. Collecting the necessary information will help the fortuneteller open his eyes to the person who is now going through life next to him. The sooner the break happens, the better.

Nine of Wands: Meaning in Situation and Question

The Nine of Wands predicts the opening of great opportunities. The fortuneteller will feel a great surge of strength, it will seem to him that he can embrace the immensity. A great mood and a surge of fresh energy - that’s what awaits the fortuneteller.

At this time, you can show yourself as a creative person. He is not afraid of any obstacles. Getting a lot of money is the result of incredible efforts. A well-deserved reward for work will bring income, but at the same time, emptiness. The person will collapse from exhaustion.

The health of a fortuneteller at the moment does not cause problems. You just need to try to rest more so that fatigue does not develop into chronic.

Relations with a partner will move to a new level. You may want to spend more time together, which has rarely been possible lately.

Communication with the outside world has been lost. A person lives in his own, invented world according to his own rules. That’s why everything is so complicated. Colleagues and acquaintances do not understand his actions. Often, behind his back, he is the object of discussion.

The alarming position of the card indicates that a lot of troubles fell on the fortuneteller’s shoulders. They touched all spheres of his life. It seems to him that a black streak has come in his life. Quarrels, conflicts at work, with a partner - all this could not but affect health.

Perhaps the person simply overestimated his capabilities and did not do the right thing. We need to look at ourselves from the outside, maybe the world is not so evil and unfair? The card calls for rest and calm down to stabilize the situation. In anxiety, the right decisions do not come to mind.

A person is not ready for innovative methods of work. He does not want (or does not like) change. Due to the fact that he loves himself too much and does not admit his mistakes, he is haunted by constant failures. If you do not start to change, first of all, yourself, there is nothing to say about the success of your plans.

Nine of Wands: Meaning of the Card of the Day

The Nine of Wands warns the fortuneteller: today no one should say anything about themselves and their plans. This is necessary so that no one can have a negative impact on a person. Better to be alone. It is especially necessary to beware of entering into a dialogue with those people with whom there has recently been a quarrel. Possible recurrence of the conflict.

If possible, take the day off from work and stay at home. You should listen to your inner voice when making decisions, so as not to step on the same rake again as last time.

The card advises: do not knock on closed doors. At the same time, acting too aloof is not the best option. The fortuneteller should not talk much about himself and his plans. Nearby is the one who gives wise advice, only the fortuneteller does not listen to them.

Nine of Wands: Combination with other cards