Queen of Pentacles Meaning in Love and Relationships

Queen of Pentacles Meaning in Situation and Question

Queen of Pentacles Meaning of the Card of the Day

Queen of Pentacles Board Card

Queen of Pentacles Combination with other cards 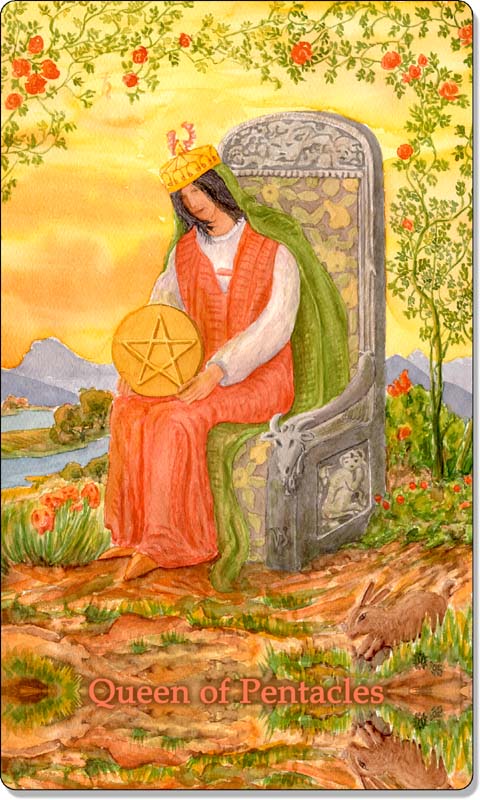 The Queen of Pentacles speaks of maturity, experience, sanity, endurance, serenity, fertility. So, the card has a positive and dignified side, and brings positive aspects.

In addition, there is stability and calmness, a person becomes patient, sensual and prudent. His works are appreciated, he knows how to find pleasure even in everyday affairs.

As a rule, the card most often falls out not to a young woman, she knows a lot and has an excellent maternal instinct. She is a good housewife, a sensitive mother and a caring wife.

Under the influence of this card, a woman has a festive mood, she wants everything to be worthy and decent, in general, everything is like people have. It is for the stability and security of material values. That is why it is important for her to have not only a stable income, but also strong family ties, a house with insurance to boot.

The card implies troubles and worries with all its joys that are associated with pleasant shopping, housekeeping, manual labor, creating a cozy atmosphere, putting things in order.

With an inverted card, a fortuneteller does not seek to develop and improve, sometimes even falls. And this can happen both in the global area and in the ordinary.

Perhaps we are talking about a worthless hostess who many years ago did not know how to cook, and even now she is not particularly distinguished by her culinary abilities. Or we are talking about a person who is afraid of something new, he does not even want to understand it. It is possible that this behavior may be innate.

The impracticality of a person can lead him to the loss of great opportunities, and even worse if a person eventually sinks into poverty. A person constantly looks around, listens to other people’s opinions, and is dependent on people’s advice. As a rule, he is irresponsible, suspicious, incredulous, careless. He lacks logic and common sense.

Queen of Pentacles: Meaning in Love and Relationships

In love and relationships, a fortuneteller manifests himself with a cordial and faithful nature. In marriage, he gets sensual pleasures. The Queen of Pentacles means that a person has security, or at least strives for it.

The card speaks of readiness for marriage, when a man is able to propose to his beloved woman. He does not have to think about his comfort and coziness, because he is all right with this.

Two loving people will dream together with pleasure, and then they will successfully realize their dreams. And if not so long ago there was something wrong in the relationship, now much will change for the better.

Arkan is characterized by excessive guardianship, complexes due to self-doubt, problems of an intimate nature. A person under the influence of the inverted Queen of Pentacles, as a rule, feels insecure. He is unable to control his emotions, and constant resentment against his partner prevents him from being happy.

It will seem to the fortuneteller that a loved one does not show due attention to him. Against this background, his mood will often change.

With this card (if it falls to a man), a person will delay the proposal for a long time, and will not decide on marriage. He will consider that the right moment for this has not yet come. Although for those around him he will try to reproduce himself as a successful person, who is doing well on the personal front.

Queen of Pentacles: Meaning in Situation and Question

A fortuneteller will show a strong character under different circumstances. He will behave thoughtfully and responsibly, even take on complex projects. The card says that he will be ready to patiently and systematically follow his goals.

As a rule, this lasso falls to a reasonable and organized person. In turn, he will be able to show his skill, insight and creative approach to solving professional problems. Thus, he will show a high level of his qualifications. And here we are not talking about great ambitions, it is more important for a person that there is order in everything in his affairs. This means that everything must be so reliable that he can be confident in the future.

The person described by this card can be called a conscientious worker and an excellent performer who could have a high position, but he does not pretend to a high position.

The card speaks of an irresponsible person who tends to transfer his obligations to other people. This person is lazy and incapable of working methodically and systematically. Perhaps he simply does not have motivation for a particular type of activity.

A person under the influence of the Queen of Pentacles has unjustified claims and conceit. He, as a rule, counts on more, but receives less than he wants.

Due to his sharp tongue and intemperance in statements, he harms himself in many situations (at work, at home). He is often hasty in his actions and impatient, which is also detrimental to his affairs.

Queen of Pentacles: Meaning of the Card of the Day

You can’t let other people manipulate you. It’s all up to you now, just do your job consistently and keep long-term projects in mind. A meeting with a woman who has strong maternal feelings and kindness is not excluded.

It is this woman who can play an important role in the fate of a fortuneteller. And listen to what she has to say.

Queen of Pentacles: Board Card

The card says that you need to be guided by your opinions and judgments, and in no case allow other people to influence your train of thought.

Any business must be done calmly, without fuss, and most importantly, there must be a measured and sequence of actions. You do not need to focus your attention only on work matters, and everyday chores are no less significant.

Queen of Pentacles: Combination with other cards