Seven of Wands Meaning in Love and Relationships

Seven of Wands Meaning in Situation and Question

Seven of Wands Meaning of the Card of the Day

Seven of Wands Combination with other cards 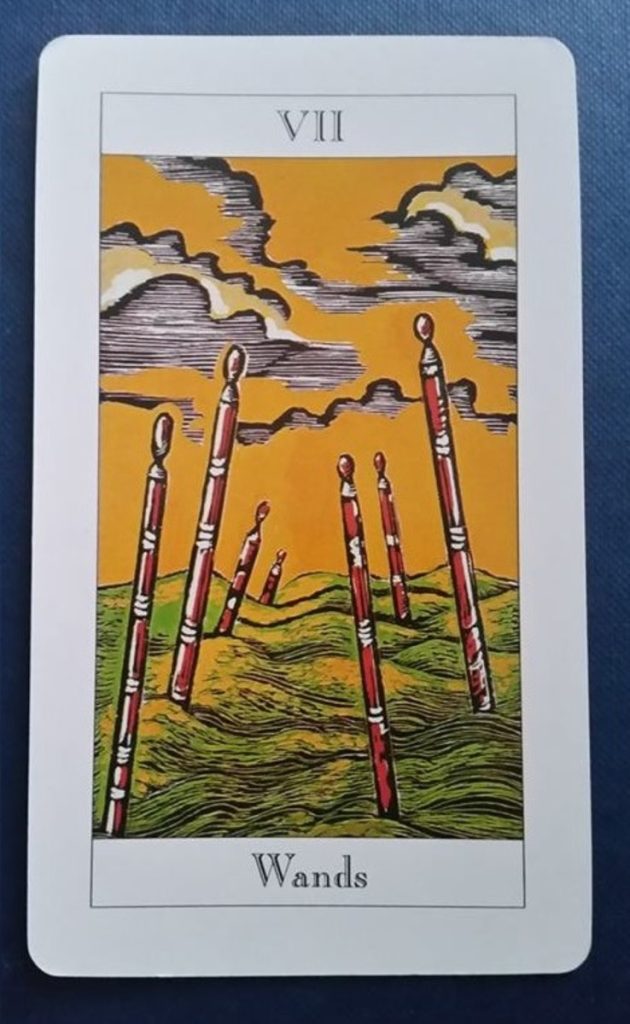 The Seven of Wands is an ambiguous lasso associated with risk, struggle, uncompromisingness, and some restrictions. True, all these actions will be aimed at achieving the goal. A person will quickly apply his efforts, it is natural for him to achieve success alone, without anyone’s help.

The card speaks of the need for change, or the adjustment of the current situation. Everything that will happen in a person’s life will become important and will bring perspective to the further course of his affairs, despite the fact that the map is complex and unpredictable. A person is ready to defend his life principles and ideas.

In principle, the card has a positive value, despite the fact that there are encounters with adverse circumstances (for example, ill-wishers). Perhaps she will not reward a person with cloudless prosperity, but she promises success in the struggle, which will be achieved thanks to courage and determination.

Under the influence of the seven of wands, a person will not have enough courage, he will lose good opportunities. He will simply go into the shadows at the moment when it is necessary to fight and achieve his goals. He will not want to listen to the people around him (partners, friends, relatives) and accept help from them.

Even the goals achieved, a person under the influence of the Arcana will not be able to defend. He is expected to lose money and opportunities due to his own insecurity, incompetence, doubtfulness, confusion, suspicion. He is frivolous and carefree, unable to resist other people, unable to choose the right strategy and prioritize.

The person to whom this card fell out indicates that he has lost his way, lost the right direction and the ground under his feet. Perhaps, under the influence of the card, not everything works out for him in business, which is why he thinks that he has no reason to behave confidently and firmly.

Seven of Wands: Meaning in Love and Relationships

There is a favorable period in life when there is an opportunity to get out of a critical situation with success. Relations with a partner are revived, even if it seemed that they had outlived their usefulness. An unexpected act can save the marriage of two people.

The fortuneteller will prove himself courageous, honest and persistent. As for personal relationships, they should only be purely personal. He should not listen to the opinions of other people, he may well act at his own discretion.

In difficult and ambiguous situations, he will also succeed, because he is used to assertively defending his positions, defending his right and interests.

There will be serious clashes with loved ones and prolonged confrontations with a loved one. Both in thoughts and relationships, a person will be confused, he will not have enough determination to properly sort out the relationship. And this is a sure way to destroy everything with a partner completely.

At such a moment, he will need the help of friends, he should heed their advice so as not to do stupid things. And if a person is not able to control the situation himself, to show his will and character in the circumstances, then it is absolutely not necessary to refuse wise and worthy recommendations, they will turn out to be very promising, they will direct him on the true path.

Seven of Wands: Meaning in Situation and Question

He will have no doubts about the correctness of his actions, he will overcome any obstacles, implement his plans, and achieve social success. He can prove himself in creative activity, show business. His energy, inspiration and enterprise will be enough for many ideas and projects. Moreover, he, in turn, develops his professional skills.

The map, when dealt with the situation, indicates problems and failures. And you can blame yourself for these problems. A person will be unable to organize the work of the team and his own workplace.

Even if he is somewhat right, he will not be able to defend his point of view. An inverted card pushes a person to the need to draw the right conclusion in the current situation.

Perhaps in some way he will show his dishonesty, will count on outside help. But still, it would be better if he showed his determination and did at least something thanks to his own strength.

Seven of Wands: Meaning of the Card of the Day

The day when a very important thing in life can happen, and do not miss this moment. Rivals and ill-wishers may appear who will try to harm you, do not let them do this, rush into battle.

A person under the influence of the Seven of Wands will have undeniable rights in order to remind his enemies that his opinion must be reckoned with. Only through courage and determination, he will achieve the desired success.

The card indicates profit and profit, it is even often called the “treasure symbol”. If a person stands firmly on his feet, then no rivals are afraid of him.

There is a threat to success, and it is great. Troubles can appear even out of the blue, and what seemed significant turns out to be such a trifle. A person must be ready to act quickly and decisively, not really counting on outside help.

Only thanks to his own strength, he will achieve high results and receive incredible satisfaction for his success. It is necessary to defend one’s views and judgments actively and consistently. He just needs to establish for himself a clear direction of action, then all the troubles will bypass him.

Seven of Wands: Combination with other cards