Six of Cups Meaning in love and relationships

Six of Cups Meaning in Situation and Question

Six of Cups Meaning of the card of the day

Six of Cups Combination with other cards 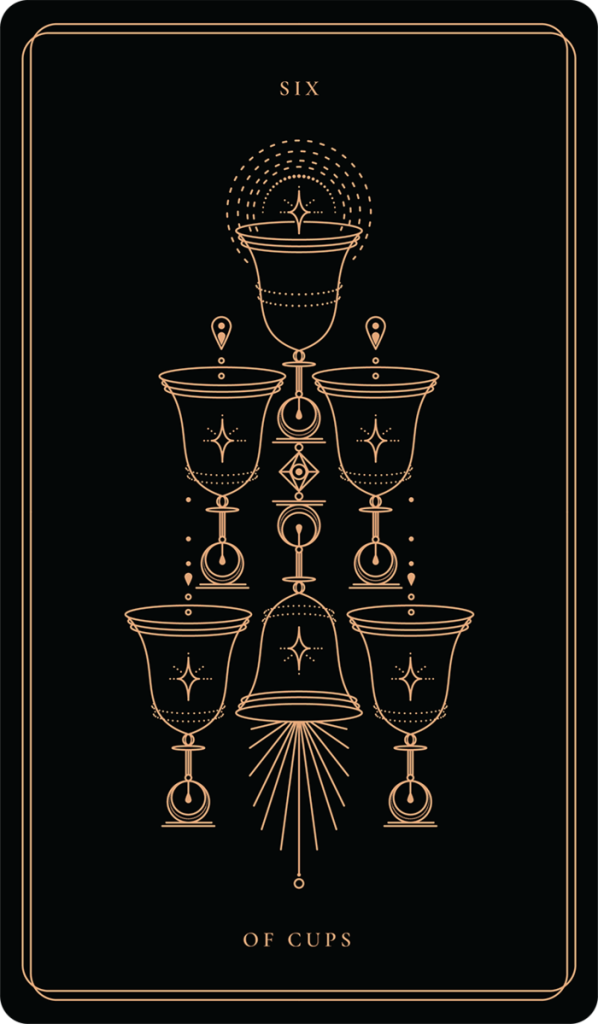 Arkan means inner harmony, generosity and generosity. In fact, the card is responsible for a positive manifestation. We can assume that all the hardships are already in the past, and now only prosperity. As soon as the difficulties have receded, a person again begins to dream and make plans, is content with the calmness and success of his labors.

A person does not strive for novelty, as it may seem to many, he is simply reborn to a new life after difficult circumstances. He is completely satisfied with his fate, everything suits him. He is engaged in self-improvement, realizes long-forgotten plans and desires. Much of it is obtained without much effort, with harmony and uplift.

It is worth hoping for the most positive development of events, when everything will turn out well: a person will achieve not only his goal, but also find personal happiness. He will be lucky in business, projects and love.

The person will run away from responsibility. If he still lives with his parents, this may be due to the flight from the parental home. Fears under the influence of this Arcana are also present in the soul of a person, which he tries in every possible way to forget. And it can be related to violence and abuse from parents. He seems to be striving for the future, but his goal is to forget about the past, he wants to erase it from his memory.

The Six of Cups indicates new opportunities and upcoming events. A person’s worldview expands, the circle of contacts is updated, new knowledge appears. If he has already created his own family, then, as it were, he escaped from the original environment, left his difficult childhood and memories. He turned his back on the past to live differently.

The card implies such concepts as cynicism and aggression in the character of a person, which could be caused by the humiliation experienced.

Six of Cups: Meaning in love and relationships

Information from the past may suddenly surface, which will be a great opportunity for a happy future. A chance meeting can become very significant in a person’s life. Either this is an old acquaintance or a former lover, but now he is able to awaken in a relationship a storm of emotions and feelings of those times that were many years ago. It even seems that the couple never parted and did not live apart.

Arkan means karmic reunion and a huge sexual attraction for both people. All doubts will be dispelled, a couple in love will experience deep feelings. And the person who gets this card during divination will be sure that the person with whom he will be next to is sent to him by fate.

The card indicates a truce in which there will be no common sense and experience. The situations will be complex, problematic and ambiguous. A person is not ready to part with his past, to forget about it, but at the same time, the card can talk about a break with friends from the past.

Often this is due to his mistakes and sins that were once in his life. He is capable of innocent flirting and playfulness, immature relationships and lightness of being. In a relationship, he can be insincere, deceitful, although he will receive joy, gratitude, sexual pleasure, affection, tenderness and soft sensuality from a partner.

Six of Cups: Meaning in Situation and Question

The card gives a person pleasure from the activities in which he is engaged. He has a rich creative potential, and the realization of his ideas is not far off, there are all the prerequisites for this. You should expect pleasant projects, assignments and tasks.

A person will be capable of good deeds, will show his care and support to those people who will need it. And he will do it from a pure heart, with good intentions. He will devote a lot of time to his labor activity, creativity, cooperation. He will also return to those cases that were postponed and unfinished, and their implementation was only discussed. From his work, he will receive satisfaction, and all thanks to the huge number of ideas and ideas.

The person had a negative experience. And now with the Six of Cups card, he wants to forget it all, like a bad dream. If a person suddenly has problems, they seem insignificant to him, although in fact they turn out to be quite serious.

Many situations will not budge, but will remain at the same level as they were before. You should not expect any special changes, especially for the better.

Six of Cups: Meaning of the card of the day

The day will give a person memories. He will be able to understand himself: what he wanted, what he dreamed about in the past, what came true and did not come true from this until today. Thanks to such an analysis, many forgotten dreams can come true. The past can really give a hint for the present and future of a person.

There may be a meeting with someone who has not been seen for a long time, or maybe there will be an important thing that was once lost. A person has a chance to become happy, joyful, in love again. Is it possible to deny yourself the hope - to be happy, because for this we live.

A person should not restrain his feelings and emotions, because thanks to inner freedom, he is able to live a full life, getting rid of all troubles. It is important for a person to be as often as possible with the people dearest to him, to spend more time with them. But even if someone suddenly has to spend time alone, let it pass like a holiday, like a pleasant memory.

Do not forget your past, forget your desires and dreams. After all, having a past, a person is able to navigate in the present. But warn yourself against a negative past, do not repeat old mistakes.

Six of Cups: Combination with other cards