The Hanged Man Meaning in Love and Relationships

The Hanged Man Meaning in Situation and Question

Hanged Man Meaning of the card of the day

Hanged Man Combination with other cards 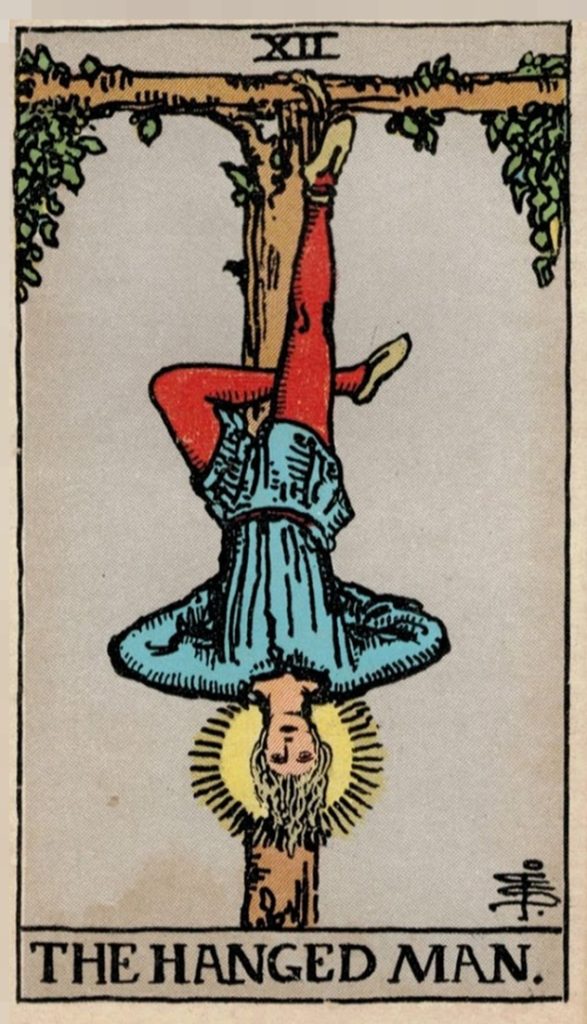 In the upright position, this card indicates a hopeless, dead-end situation. At the same time, this does not mean at all that there is no way out of the situation at all - it simply cannot (or is very difficult) be done in the usual way. It is necessary to change the perception of reality and the course of action, only then can you get out of the current situation.

The card also has a lighter meaning - it can indicate a willingness to make a sacrifice for the sake of higher goals, or the fact that the right behavior can help even in adverse circumstances to gain a benefit. But at the same time, the sacrifice must be conscious and voluntary. Otherwise, you still have to lose something, but the choice will already be up to fate, and who knows what she will choose.

An inverted card most often indicates that a crisis moment has come in a person’s life, and it is imperative to find a worthy way out of it. Then it will help to “grow above yourself”, to move to a certain qualitatively new level. But this will require a rethinking of one’s life and actions, the search for a new life path, the formation of a new system of values. At the same time, we must not forget that development is not limited to career growth and improved well-being - the spiritual component cannot be neglected.

Sometimes the inverted Hanged Man is seen as an indication that a person makes unreasonably high demands on himself and his environment, and because of this he cannot get what he wants and does not know satisfaction.

The Hanged Man: Meaning in Love and Relationships

In such a situation, the Hanged Man is interpreted as an indication of a crisis that arose due to the inability and unwillingness of partners to take into account each other’s interests and sacrifice something for this. Also, the card may indicate that the quarrel that has occurred is final, it will not work to restore relations.

If the fortuneteller does not have a permanent partner at the moment of fortune telling, the Hanged Man portends that such loneliness will last for quite a long time. At the same time, in fortune-telling about relationships, the Hanged Man says that in the situation little depends on the person himself, you just have to put up with it and wait.

The inverted position of the Hanged Man when divining relationships suggests that the situation requires a radical solution. Partners need to explain themselves frankly, find out all the details and make a final decision. Otherwise, their romance may die, and this will happen either because both partners have incorrectly set priorities in the relationship (they are very interested in the material or physical side of the matter, for example), or one of them will not understand in any way that his behavior deeply offends the other.

At the same time, the inverted Hanged Man does not at all mean that a positive resolution of the situation is impossible. But it can be quite difficult and require considerable effort and sacrifice.

The Hanged Man: Meaning in Situation and Question

In any situation, the Hanged Man suggests slowing down, temporarily doing nothing, but spending time rethinking the situation and looking for new, unusual ways to resolve it.

If a question was asked about some business, the card says that now is not the right time for this. You need to think about whether it is worth messing around at all, or is it better to give up a hopeless activity. It may also be that a fortuneteller is waiting for a certain twist of fate - the situation will not develop at all as expected. So if the fortune-telling went to a situation regarding some kind of renewal (job change, relocation), then the innovation should be accepted.

But if the hanged man fell out in a health scenario, then you should pay attention to this. The lasso portends a serious deterioration in well-being, serious illness and a high probability of injury.

In this case, the fortuneteller’s situation is really bad, but he drove himself into it himself. Further events may develop in different ways, but it is better to immediately begin to get rid of arrogance and self-confidence - they are the main cause of the problem.

The card also suggests that you will also have to look for a way out of the situation on your own, advice may be inappropriate. In addition, the Hanged Man in an inverted position says that they are trying to subordinate a person to someone else’s will, but this cannot be allowed, it is necessary to fight. Therefore, such a card is also considered a harbinger of conflicts.

The inverted Hanged Man in divination for health calls for a closer look at your body. It is better to go to the doctor just in case - there is a high probability of developing a serious disease that does not give symptoms for a long time. Also, a person may not notice the manifestation of the disease, because they are too busy with something else.

Hanged Man: Meaning of the card of the day

You have to be patient and just get through the day. Attempts to somehow influence events and accelerate their course will only lead to the opposite result. It is better to spend time on understanding the situation and developing action plans for the future.

Sometimes you have to think about what you can sacrifice in order to solve the problem, if you can not completely abandon the stalled case or leave everything as it is.

In no case should you go ahead, try to solve the problem by force - it will be worse. It is better to try to look for workarounds, and choose the most non-standard route for this. It is worth being patient until events begin to develop on their own, if such an opportunity exists. If it is not, you need to prepare for the fact that success can be quite expensive.

Hanged Man: Combination with other cards