Three of Pentacles Meaning in love and relationships

Three of Pentacles Meaning in Situation and Question

Three of Pentacles Meaning of the card of the day

Three of Pentacles Board Card

Three of Pentacles Combination with other cards 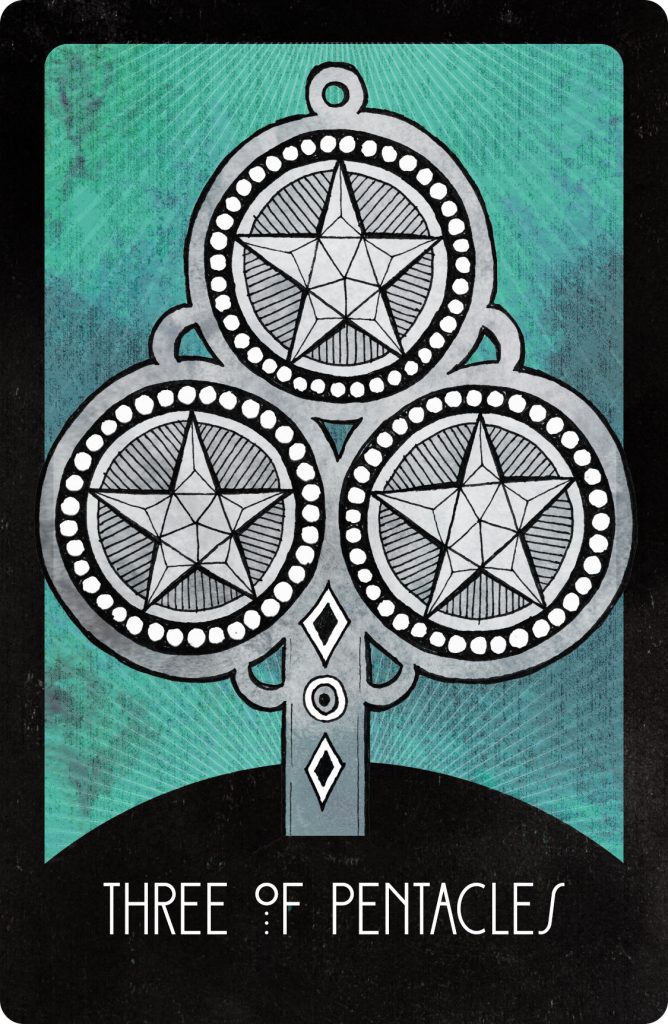 The Three of Pentacles symbolizes evolution, gradual progress. Its appearance does not promise stunning results, noisy victories and the same defeats - it indicates that the goal will be achieved as a result of regular efforts, gradually.

The card denies both instant success and stagnation, marking time. She calls to use hard work, diligence, perseverance and discipline as the best means to achieve the goal.

Also, this card can symbolize the overall result of a lot of effort. It means working together and helping each other.

The appearance of a card in fortune-telling can be interpreted as a recommendation not to rely only on yourself, not to repel possible helpers and patrons, since the goal will be achieved by the efforts of more than one person. Arkan warns against overconfidence, which can damage interaction.

In an inverted position, the card can symbolize poor (or mediocre) performance, the cause of which is laziness and incompetence. On the other hand, the card may indicate that a person lacks true skill in his business, that he acts like a hack (there is such a historical name - “partach”), does not understand the essence of the matter, works rudely.

The Three of Pentacles can also represent financial difficulties. It will not be a real problem, but “little fuss and flutters,” small but annoying troubles.

Sometimes the card says that a person cannot attract attention to himself, prove himself, and that the reason for this is his own laziness and lack of skills. But, he is capable of “minor dirty tricks”, the evil of the household level.

Three of Pentacles: Meaning in love and relationships

Most often in matters of love and relationships, the card says that the matter depends entirely on the person himself. He has no need to hope or blame fate - his own initiative, thoughtful actions can give him what he wants.

This card can also speak of the stability and seriousness of a relationship in which partners treat each other with genuine interest and respect. In such an alliance, both parties take care of themselves, strive to maintain attractiveness in the eyes of the partner, not to lose his interest. The results fully justify the effort.

The Three of Pentacles can also fall out when they are guessing at marriage and the further development of relationships. The card also speaks of some business that will become a step either towards making a connection (if the fortuneteller is alone), or towards clarifying the relationship and their transition to a deeper stage.

An inverted card speaks of a person who, due to his personal qualities (or rather, their absence), is not able to attract and especially retain the attention of a partner. Often this is characterized by a person who is deprived of his own will and point of view, completely accepting the opinion and desires of his soul mate.

The Three of Pentacles can indicate a person who is usually called rogue in everyday life - cunning, but not very smart, devoid of sophistication. Such a person is a primitive materialist and egoist, who believes that everything in life is bought and sold, and who considers the beauty of relationships a waste of time and money.

Sometimes an inverted card indicates uncertainty, insecurity in a relationship in which partners have not yet decided what they want.

Three of Pentacles: Meaning in Situation and Question

If the situation under consideration concerns a career or business, then the card hints at not too fast, but sure success. A person is expected to increase strictly according to the schedule, without acceleration, but without failures.

In financial matters, the Three of Pentacles is a good sign. It does not promise super profits, but confidently promises the absence of losses, losses and unforeseen expenses.

When divining for health, the card speaks of good physical shape. Women may take it as a recommendation to do a long-planned plastic surgery.

In an inverted position, the card can warn a person that he has problems because he has chosen the wrong career path.

The card says that in the current situation, the fortuneteller should not take on the role of leader - he will not be able to cope with it. It would be better if he takes on the role of an executor of other people’s orders - this will give the best result.

This situation suggests that a person does not have enough skills and training to independently get out of this situation.

Three of Pentacles: Meaning of the card of the day

As a card of the day, the Three of Pentacles recommends abandoning the remnants of the past that hinder development and moving to a qualitatively new level. The form of this refusal can be different - you can finally find out the relationship with a partner, change jobs or finish work that has long begun.

In any case, this should be the end of some routine stage of a past life, which will allow you to start a new business.

Three of Pentacles: Board Card

The card recommends not focusing only on high matters, neglecting not too large-scale, but important matters. You need to do well any business, and not delay the solution of even small problems. This will not give a bright result, but it will certainly bring you closer to success.

Three of Pentacles: Combination with other cards